We send out all of our items with speed and security in mind - over 82,000 packages were delivered to Australian businesses by our Express Couriers last year alone.

Trusted by over 62,963 Australian Businesses

Join over 62,963 Australian organisations that have put their trust in our service and improved their communications. With our 100% satisfaction guarantee you know that when you’re with us, you’re backed all the way.

The Savi 7300 Office series connect to desk phones and to PC/Laptops via standard USB connection.  The 7300s use DECT wireless technology to connect to its base unit (not Bluetooth) for the best possible sound quality and range. It comes with the cable to connect to 90% of phones.

This model is stereo (2 ear cushions), and is UC. ie. not certified for MS Teams.

There are 4 different variants of the headset -  Mono/Stereo,  MS Teams/UC   To see all the variants CLICK HERE

Teams Certified.  Functionality can depend on how you use Teams and the package you have but in general a Teams certified headset will allow you some shortcuts into Teams and its functions. The base unit has a Teams button that will pulse if you have a Teams notification and you can tap this to see what that is on your your computer.  There's also a Teams button on the headset.  If you don't use it with Teams, it will work as a UC headset with 99.9% of applications but won't be certified for those softphones.

UC stands for 'Unified Communications' , essentially that just means its not certifed for Teams but is certified for other things. It will still work with Teams, giving you audio, you just won't get those shortcuts or notifications) and, like the MS version can be used with other softphones and applications.  UC versions are certified for use with leading UC platforms such as Cisco, Mitel, Avaya, Zoom, RingCentral, 8x8, AWS & Unify but will work with any application regardless.

As with all wireless headsets you will need an accessory to answer and finish calls via the headset. We know, it seems crazy that even such a modern headset as this can't perform this apparently simple task but there are so many different phones all with different requirements that this functionality just can't be built into the headset. We call it a RAD (remote answering device). It could be a standard handset lifter or a special 'electronic hook switch' (EHS) cable that runs from the base unit to the telephone - it all depends on which make and model phone you have. If you decide not to get this accessory, you'll need to press a button on the telephone (or lift the handset up yourself).

Nothing sounds less professional than your clients hearing all the hubub around you, but with Poly's Acoustic Fence Technology this headset puts you in a little bubble, and is the equivalent of an ultra noise cancelling microphone. That said,  it doesn't have the Active Noise Cancelling to help the user focus.  But other Poly headsets do if you need that.

Built to last, the Savi 7300s are substantially heavier than some of their competition, weighing in at 120g for the mono and 160g for the stereo. They balance this with a wide, padded headband. That said, if you're the delicate type, this may not be the headset for you.

Perfect for densely packed call centres,  these Savis won't get interefernce even when there's lots of them around. Additionally they have the latest 'miliary level' encryption, so they meet the highest level of security (step c) currently set by the DECT Forum (as at May 2021).

CONTROLS; you can adjust volume, and mute the call via he headset. The mute button is nice and prominent to easily be found but for some reason Poly coloured it red, no issue as such but you can't actually see that when you're wearing the headset.  As we mentioned before you can answer calls from the desk phone via the headsets  only if you get an extra accessory.  To find out which one is required for your phone,  click add to cart and follow the prompts.

As you'd expect from Plantronics/Poly they give great quality wide-band sound or you can switch to narrow-band for the best battery life. The microphone arm is flexible for perfect mic positioning and the mic itself has noise cancelling so your caller will hear you perfectly, not all the noise around you.  There is a busy light to show colleagues that you're on a call but this isn't the most eye-cathing of all the brands offerings for this feature.

FREEDOM* - hold on to your FREEDOM! Sorry - we're big George Michael fans here .... With a range of up to 180m you can get some serious multi-tasking done. Now please be aware that 120m is line of sight with no electronic interference to reduce it. Whilst many headsets advertise 120 to 180m range, in an average office it's closer to 55-70.

Of course as with all Poly PC connected headsets, the 7300 series will connect to the Poly Hub and Poly Lens application. Allowing the user greater control of their headset and allowing IT managers control to monitor useage and update firmware en masse.

One thing of note is that at time of launch they are advertised as having a battery that can only be replaced by a technician (that will be down the track in a couple of years). That said,  we've seen this happen before and later they sell the battery for end user replacement -  stay tuned.

Other Products In This Series 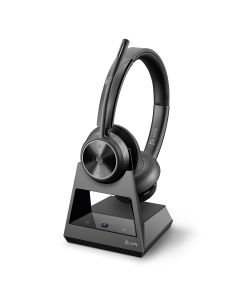 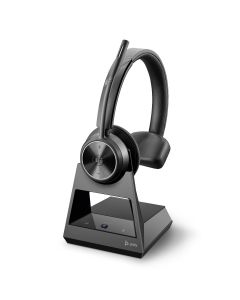 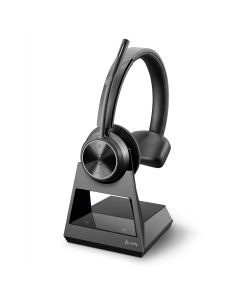 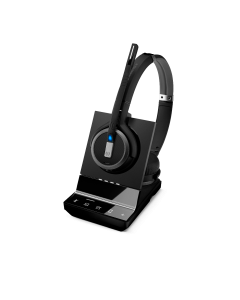